Maurice Othulo, our Global Head of USAID Financial Management, shares memories from a recent trip to Madagascar and why he believes our mission is so important.

"The date is April the 25th 2017 and the setting is Marie Stopes Madagascar, I'm with their Outreach team in Ambohidratrimo district just outside the capital Antananarivo. The outreach team today is camped at the chief’s administrative offices, which have been converted temporarily in to a makeshift health centre for family planning. It is already shaping up to be a hot sunny morning and the MSI vehicle is doubling up as a shelter in addition to being a storage facility for the moment.

"Approximately 15 women of varying ages, some with children, are seated or standing together trying to shelter from the sun while at the same time listening keenly to an Marie Stopes Madagascar nurse. The nurse is holding a model human penis in one hand and a condom in the other, explaining what each is and how the two go together. To gales of embarrassed yet engaged and observant laughter from her audience, the nurse now expertly fits the condom on the penis and then makes a joke about the time of day and what the ladies should not think of yet. She shows them a few other contraception options including a pill, and then invites the audience to touch and feel all of them. 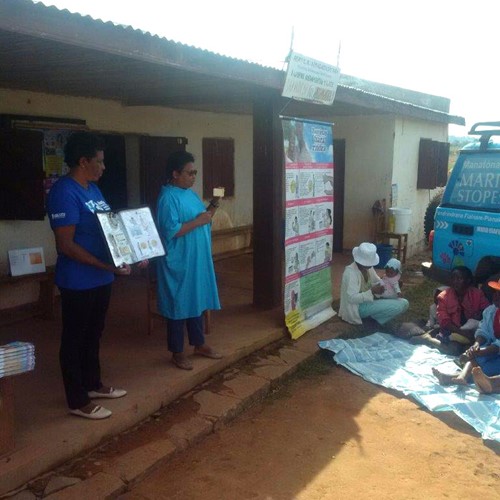 "The moment that stays with me is when a woman of about 40 years old steps forward, picks up a condom and proceeds to examine every detail of the sheath while shaking her head in wonder. She is mesmerised and then confides to one of our team members that she has never seen a condom before, she did not know of its very existence until this moment. Her verdict? 'I wish I had known of this before, if you give me some I am really going to use it'.

"So just like that, the population of the world that can say it knows about and can use contraception has increased by one, and Marie Stopes International was there going about its mission and making it possible.

"Having been born and brought up in rural Kenya, in circumstances pretty similar to the above, I can fully understand how a person can get to be 40 years and not know contraception exists or be stumped by the humble condom. Three of my four sisters had to be married off as children once they got pregnant, their futures blighted forever, marrying for convenience and custom to the first male that happened to come along.

"To this day I am still responsible for funding their upkeep and the education of their children, because they have nothing and their marriages are all just for a place to live. Their husbands still avoid supporting the wives, since they are doing us all a 'favour' already. All of this because we did not know then that there were options.

"The mission is one of those things one doesn’t appreciate the presence of, but would immediately feel the absence of."

"What am I doing in Madagascar? I am there accompanying USAID financial auditors, who are ensuring that the work we're doing is compliant with USAID legislation. The auditors are there to observe and question our team members. After a couple of hours the auditors congratulate our team members on the spot for how well they are applying USAID rules, but more importantly for the difference they are making.

"The night before we had all been out to dinner in Antananarivo and the street was thick with persistent and clearly desperate child beggars. We could see their parents urging them on and tried to imagine how much of one’s pride and dignity one must swallow in order to be on the street with their children doing that. Those people very possibly never wanted those children; they can hardly feed themselves, let alone think about the safety and development of their children.

"The Marie Stopes International mission may not be universally deified around the world, but it matters a great deal. It is one of those things one doesn’t appreciate the presence of, but would immediately and keenly feel the absence of."

We will not turn our back on those who need us most.

How you can help The Global Gag Rule: A world without choice